Viewer Favorites
Pay Special Attention To These Things When Feeding Your Kids
The Best Gifts For Quilters and Sewers – 2023 Guide
Epsom Salt (Elsa’s Magic) Painting
6 Ways to Tell if Your Kid Is Struggling With School & How...
The Best Craft Kits For Kids – 2023 Guide
6 Tips to Choose a Color Scheme for Your Home
Fashion Items That Double Up With A Medical Use As Well
The Relationship Between Nutrition and Pregnancy
14 Ideas You Can Steal from Nose Rings
5 Signs It’s Time to Get Your Child a Math Tutor 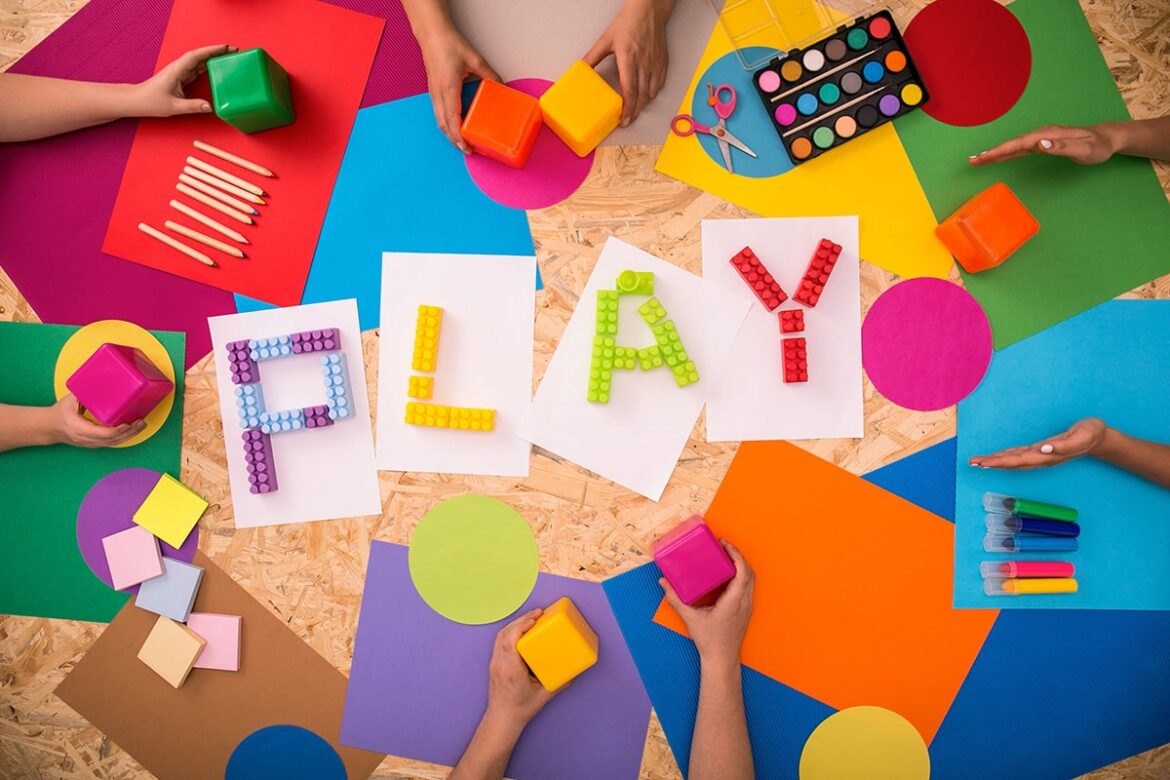 It’s still school holidays here, and my husband and I are eagerly spending all the time we can with our awesome tiny human before she starts school at the end of January. She loves to do crafty things (of course!) and with it being a vicious Summer outside, we’ve been doing lots of indoor activities.

I got a small voucher to my local craft store so I decided to check out their craft kits, but was a little dismayed when I got there… they had an alarmingly large array of rock painting kits, and next to nothing else! I couldn’t believe how many of the kits contained, according to the outside of the box, a few rocks, some acrylic paints, and a paint brush. Maaaaybe a few googly eyes or some such to stick onto your new rock, but that was it.

Not really expecting much I plugged in children’s craft kit into Amazon and was shocked by range! It was amazing how many of the kits I knew my daughter would have a blast with, so without further ado, the best craft kits for kids.

This post contains affiliate links. If you purchase after clicking these links, The Mother Huddle may receive a small commission, at no cost to you. 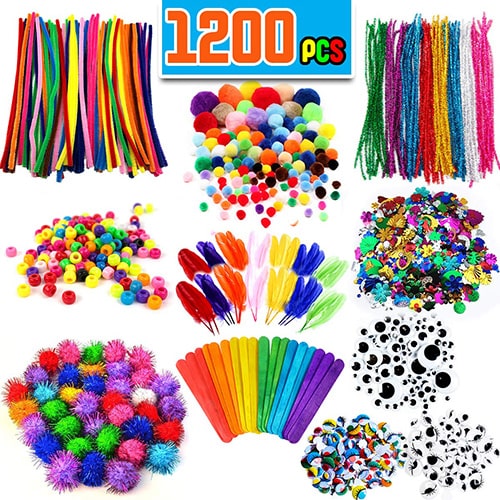 This is one of those kits that has a little of everything, which is a PERFECT starting point for craft kits. You’ll be able to come back to this one over and over, so even though it costs a little more than some of the others, you’re going to get many crafting sessions out of this one box, rather than it being a single activity. This is also a great kit for those little ones who like to do their own thing, make it up as they go, rather than follow instructions. 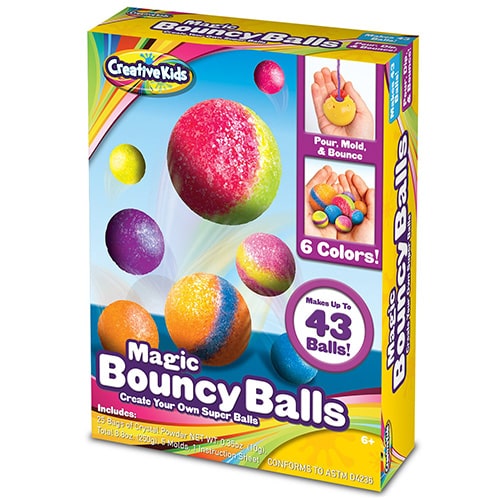 This is such a neat kit because once you’ve had your crafty creation session, kids will have something they can actually play with afterwards! Bouncy balls do tend to go missing easily, I know, so it’s very cool that you can make a whole bunch of them with this kit. 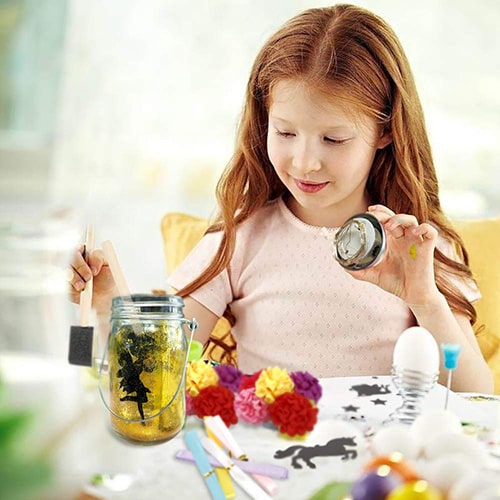 Ugh, I just LOVE this! My daughter is a great sleeper, always has been, and is a great self-soother, too. This is due largely to the fact that she has a nightlight in her bed (who goes by the name of Mrs Octi https://www.amazon.com/Cloud-Twinkles-Travel-Nightlight-Projector/dp/B00MH2ZRLQ ) and a little pal who sings and has a light (she’s called Pomona https://www.amazon.com/VTech-Baby-Glowing-Lullabies-Elephant/dp/B07B6Y59ZP). Nightlights aren’t just for babies and toddlers, we’ve found that as our daughter’s imagination grows, so does her fear of the dark, so she’s more attached to her nightlights than ever. She’d love to make her own, no doubt, and this sort of kit could be really beneficial for children having a difficult time at night, giving them a sense of ownership over the light might make them feel more like they can ‘own’ their fears, too!

Paint & Decorate Your Own Wooden Magnets 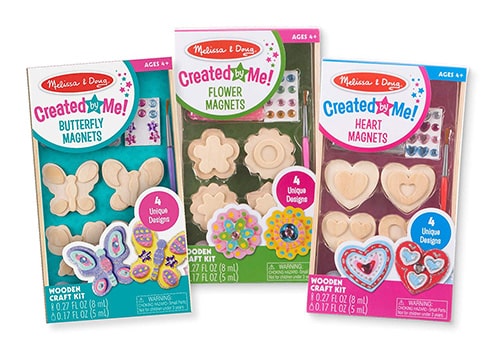 We’ve done a similar kit to these and my daughter just loves to see her handiwork on the fridge holding up the various things she’s made or I need to remember. Very fun and a useful end result, who could ask for more?! 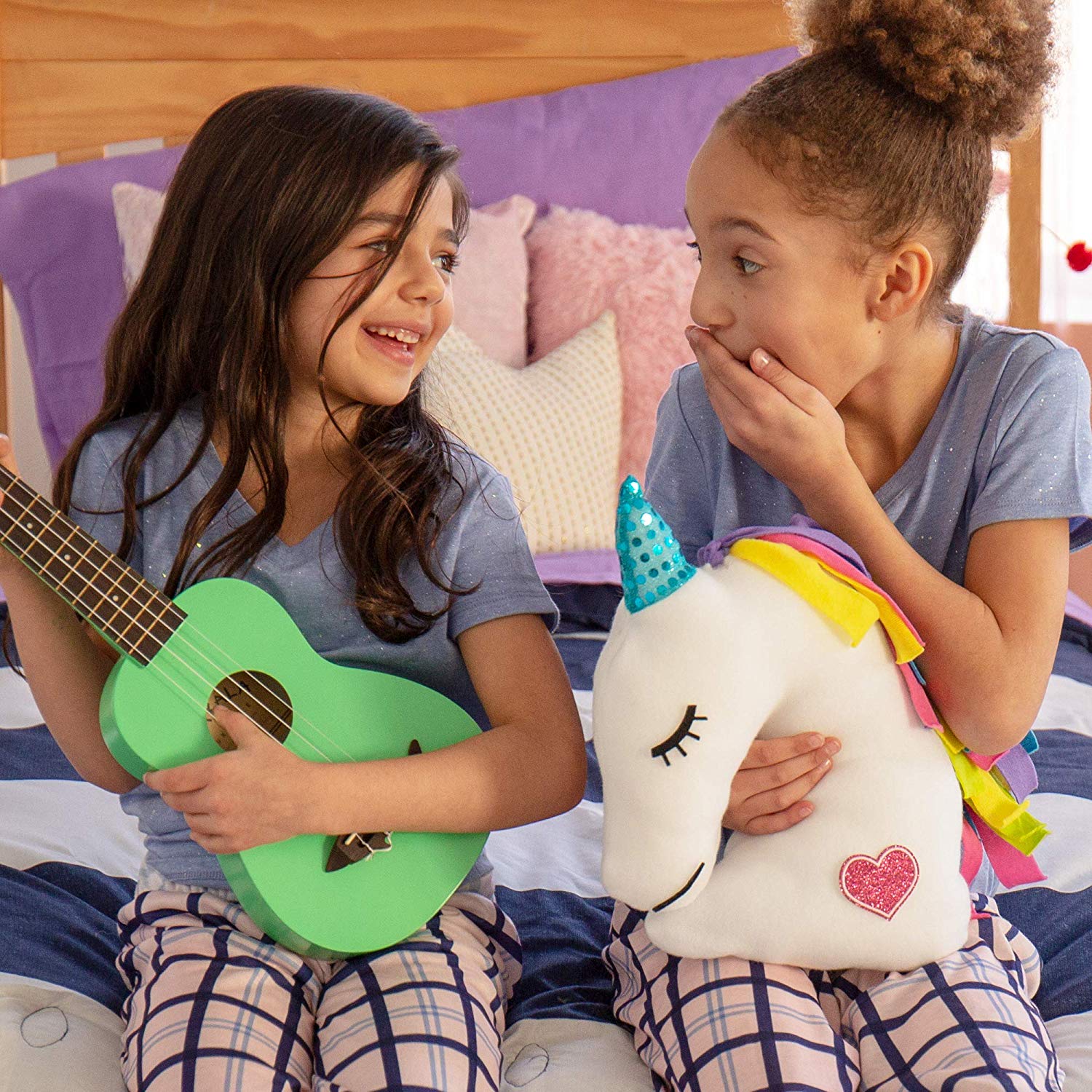 This kit is great for younger crafters because it doesn’t involve any sewing (or sharp things!) but you get a little pillow out of it! It’s simple, straightforward, and customisable, so it’ll appeal to many a little crafty person. 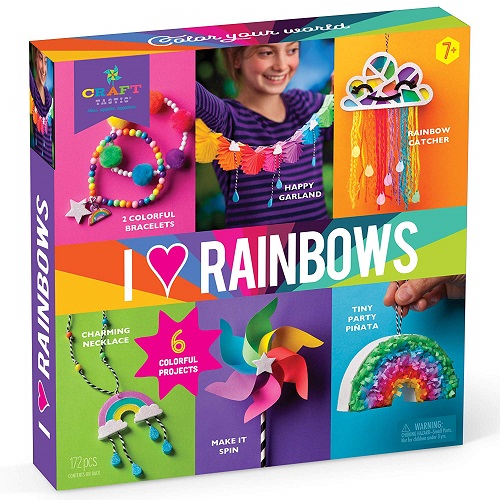 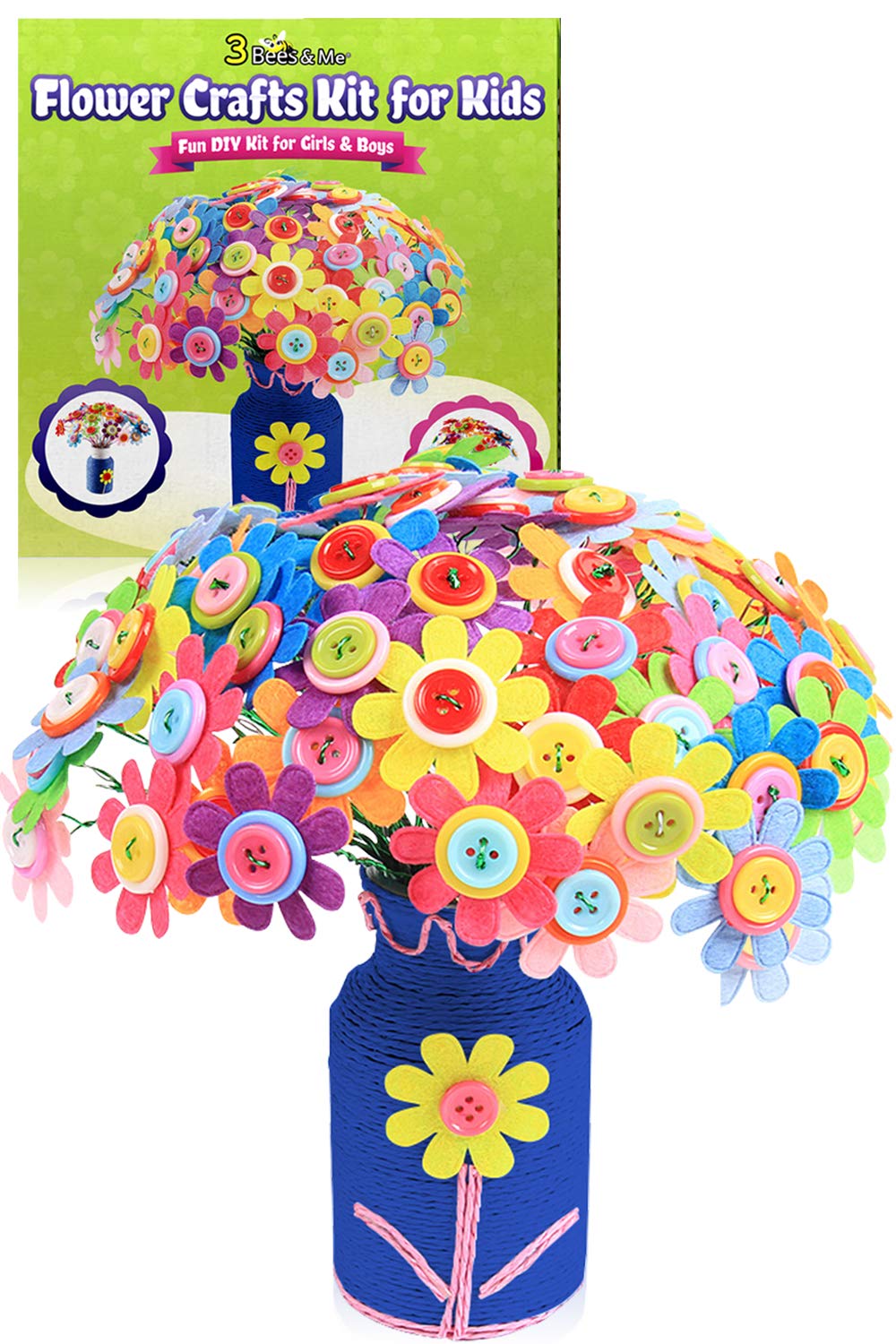 My daughter loves buttons. I loved buttons as a kid (still do!), and I’m pretty sure it’s a fairly universal thing that children love buttons, which makes this kit both adorable, and appealing to many children. It’d also make a great gift to a kid that’s difficult to shop for. 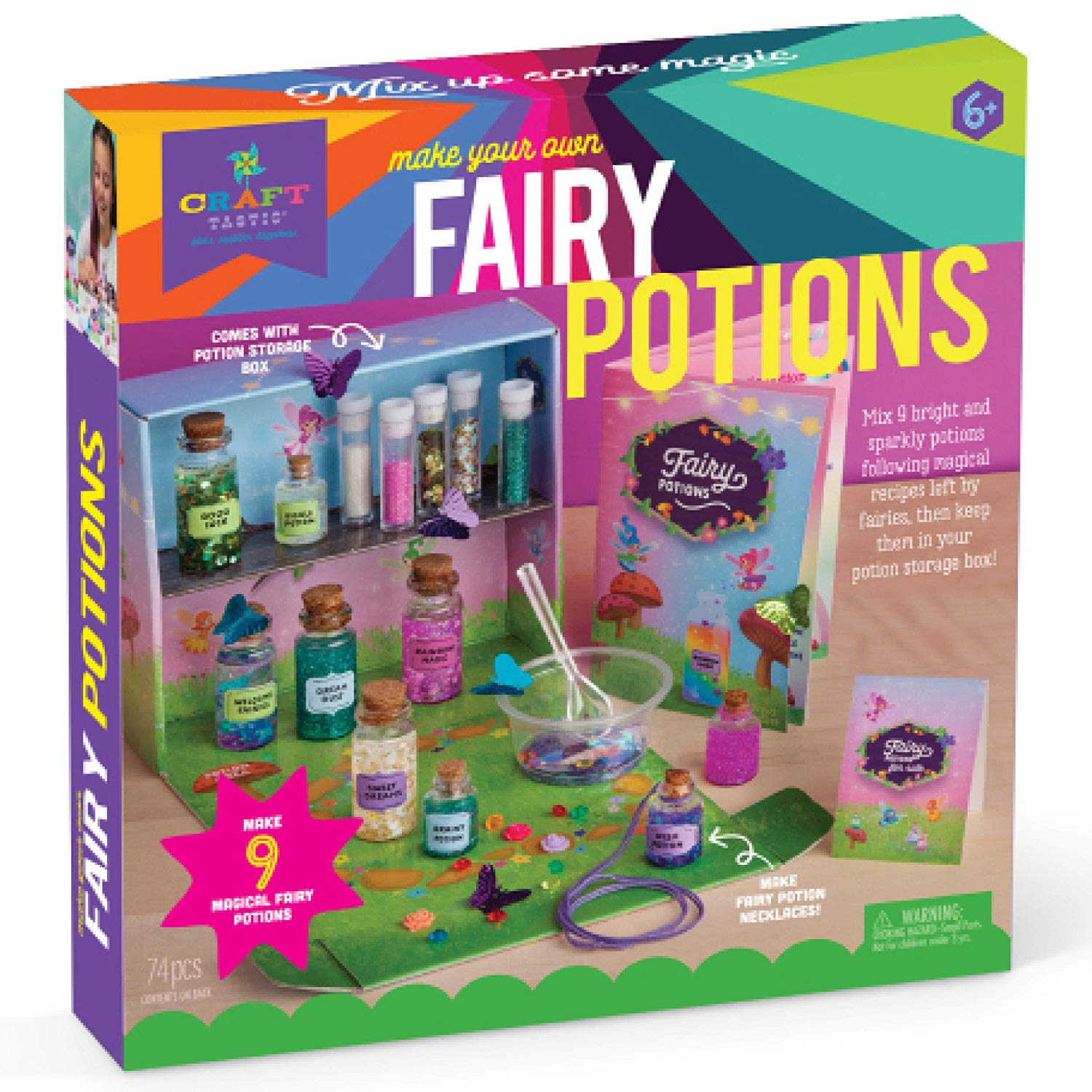 This is one you could be forgiven for just buying for yourself. My daughter and I love glitter, but (and it’s not called ‘herpes of the craftworld’ for nothing) it does get everywhere, so I love crafts that involve contained glitter. This little kit is just so cute! 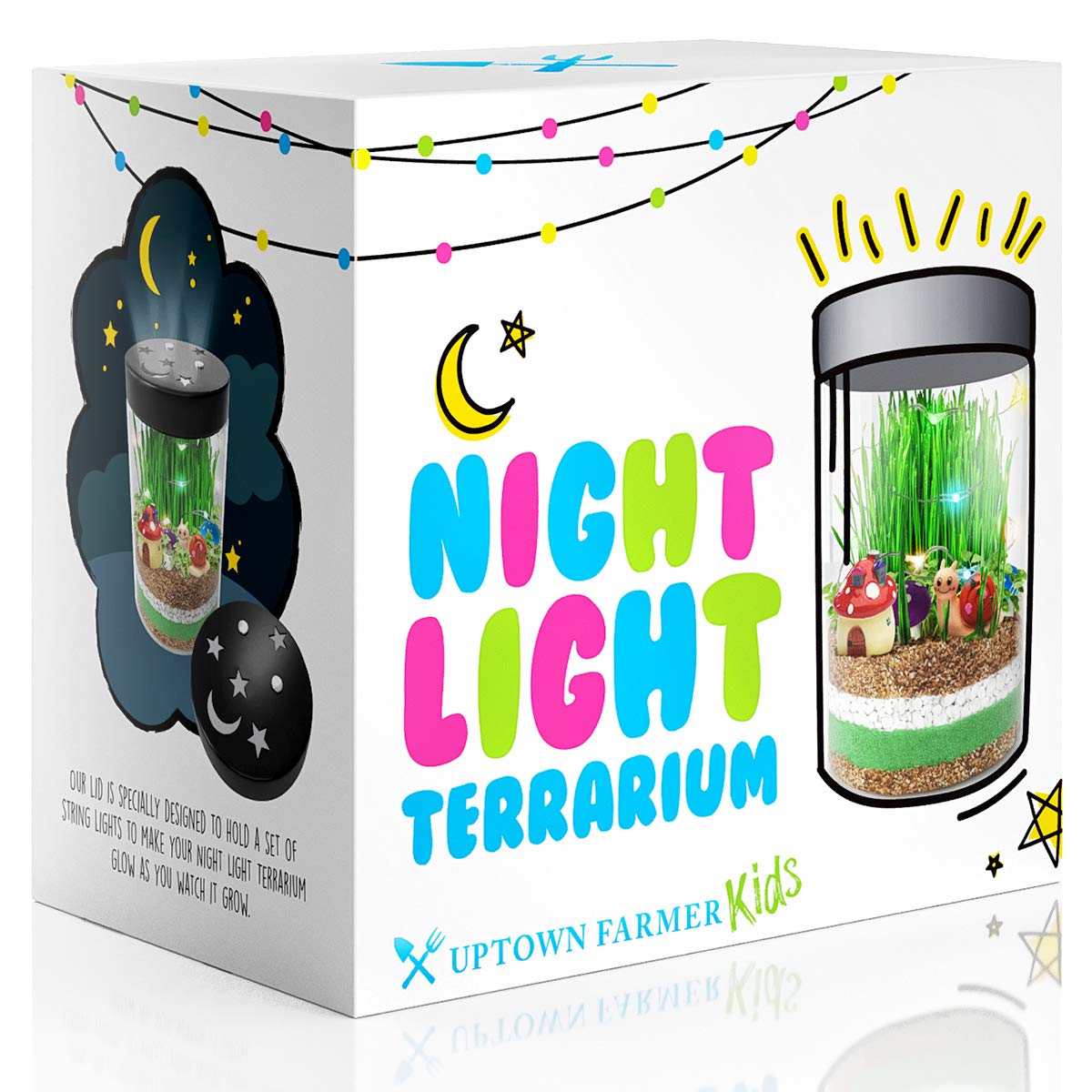 It has lights, too! This is super cute, and whilst it’s not a traditional ‘craft’ kit, it is still crafty and it’s something that kids will LOVE to check each day to see the changes as the seeds grow. 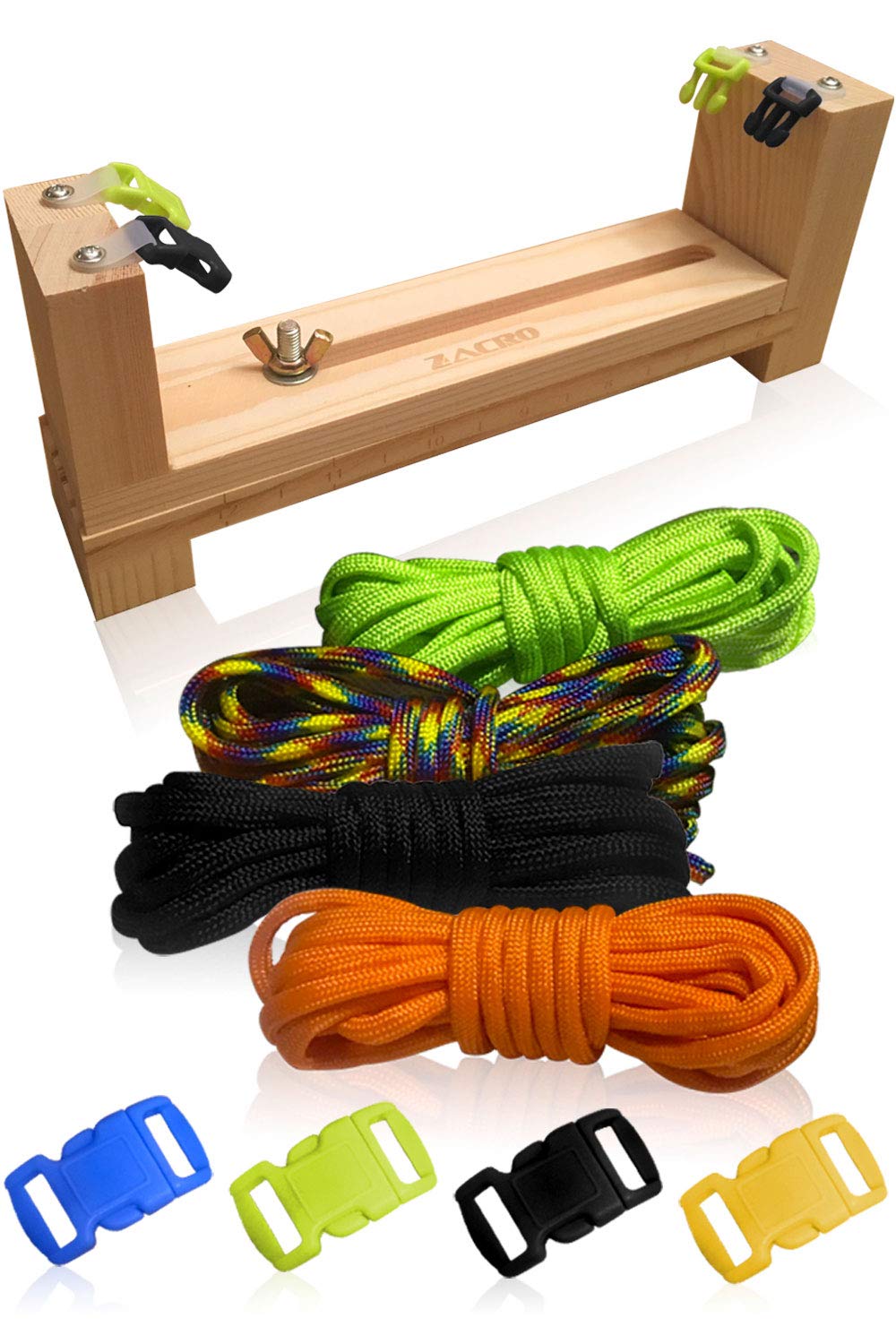 This is the best paracord kit I’ve seen because it comes with a groovy little loom to make the bracelets on. Craft kits that actually entice boys can be a bit tricky, but these have a great track record as being loved by boys of all ages. 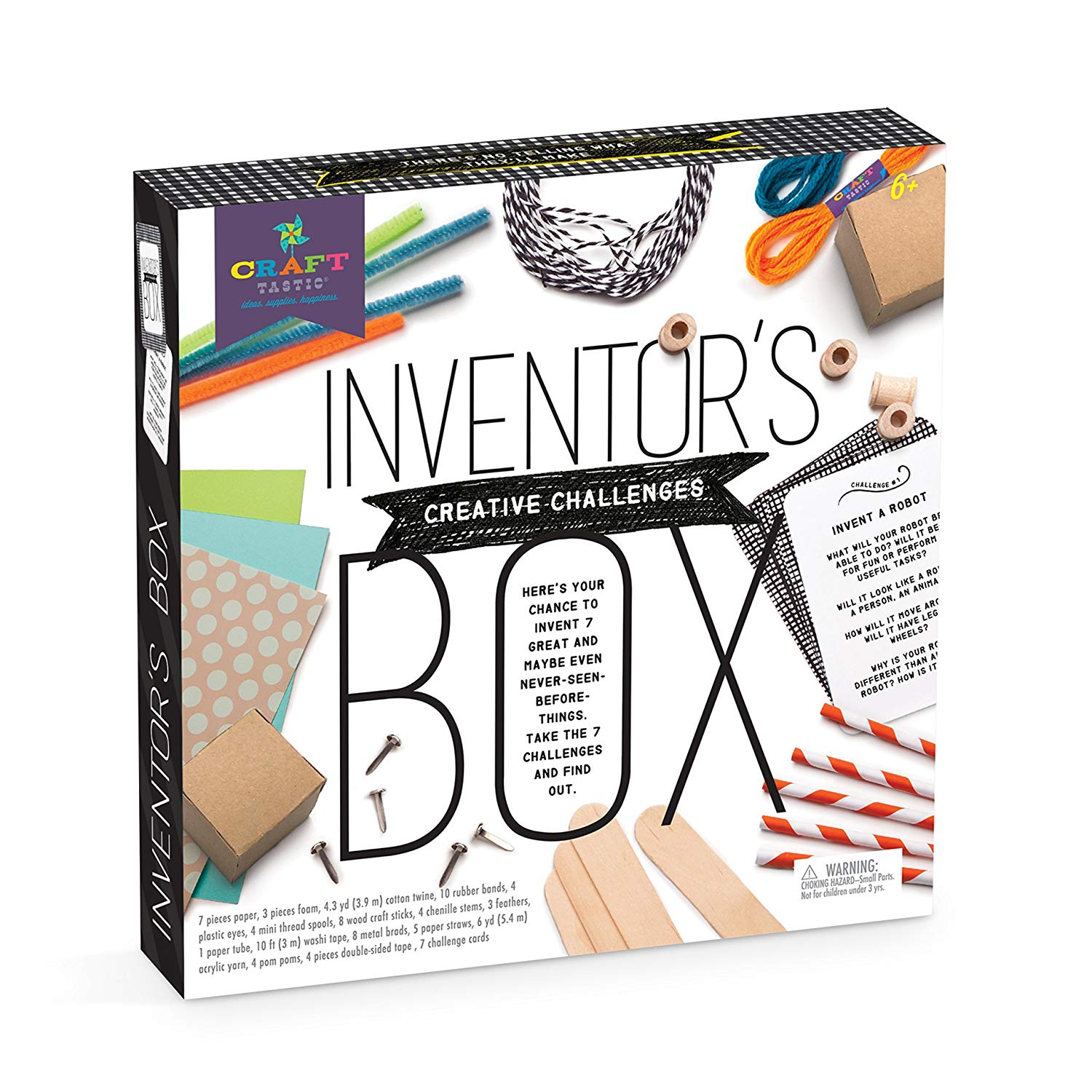 This is a great craft kit for kids a little older, or who are super imaginative and like a challenge! It’s a very cool idea to give them a bunch of resources and then ask them to make up a musical instrument or a game!

Make Your Own Water Globes 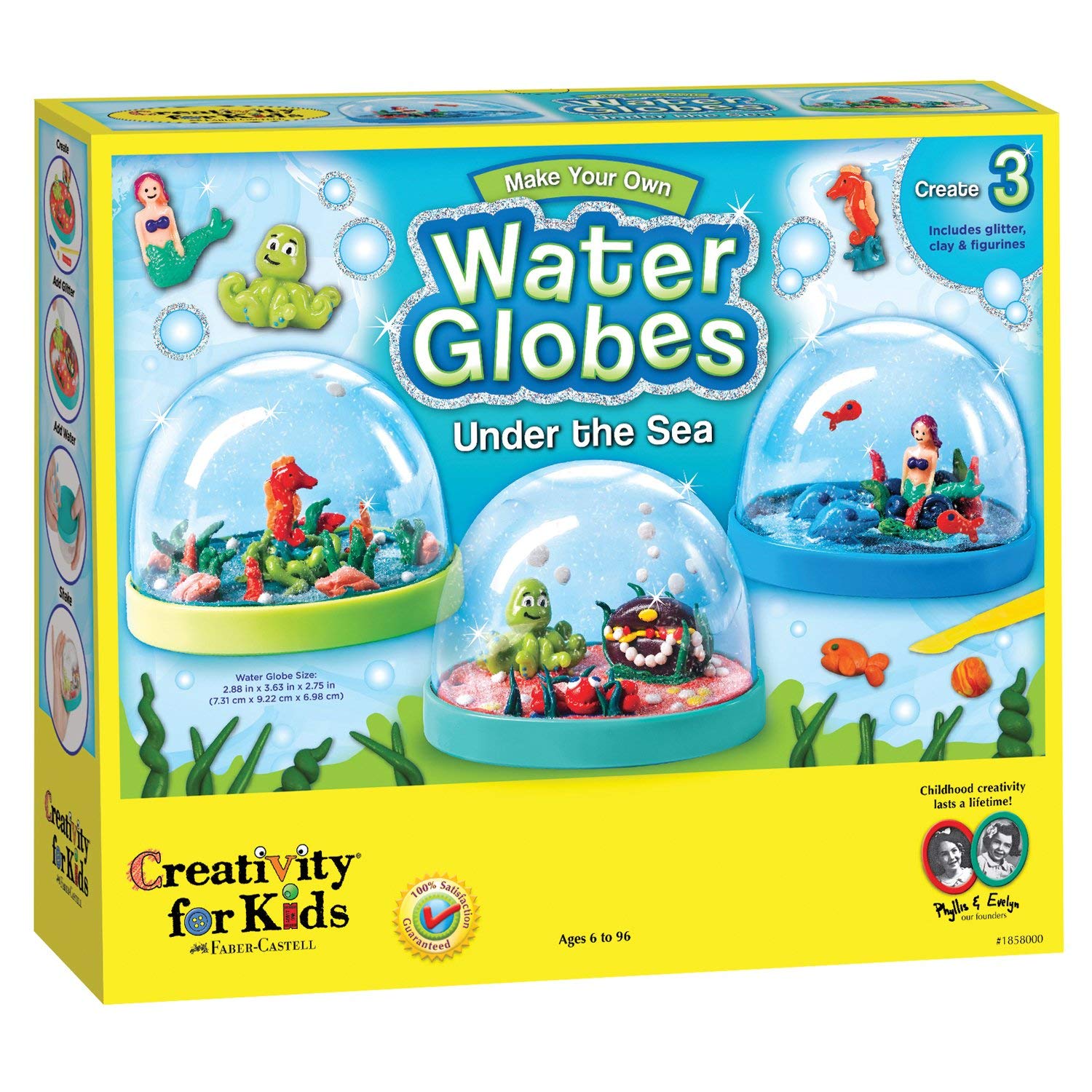 Who doesn’t love a snow globe?! I love that this kit is so accessible for a variety of ages, and that they have a lovely keepsake afterwards! Super cute, and very customisable. 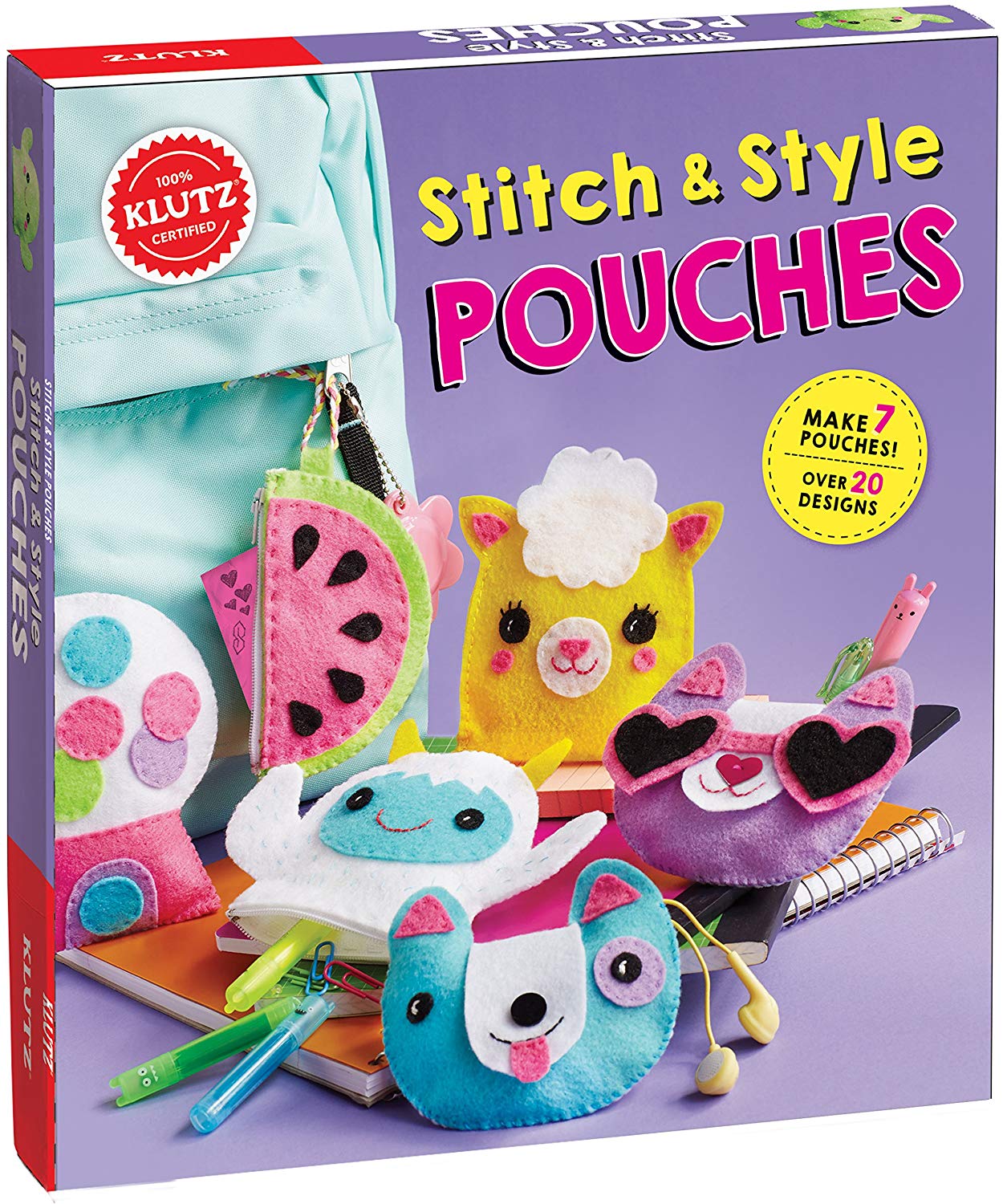 My daughter loves to put things into bags and pouches, and from what I’ve heard this delight is shared by many of her tiny human peers, which makes this little kit a delight for them! She’s getting into hand-sewing now, and the idea of being able to pack things into a little pouch she herself has made is very appealing to her! 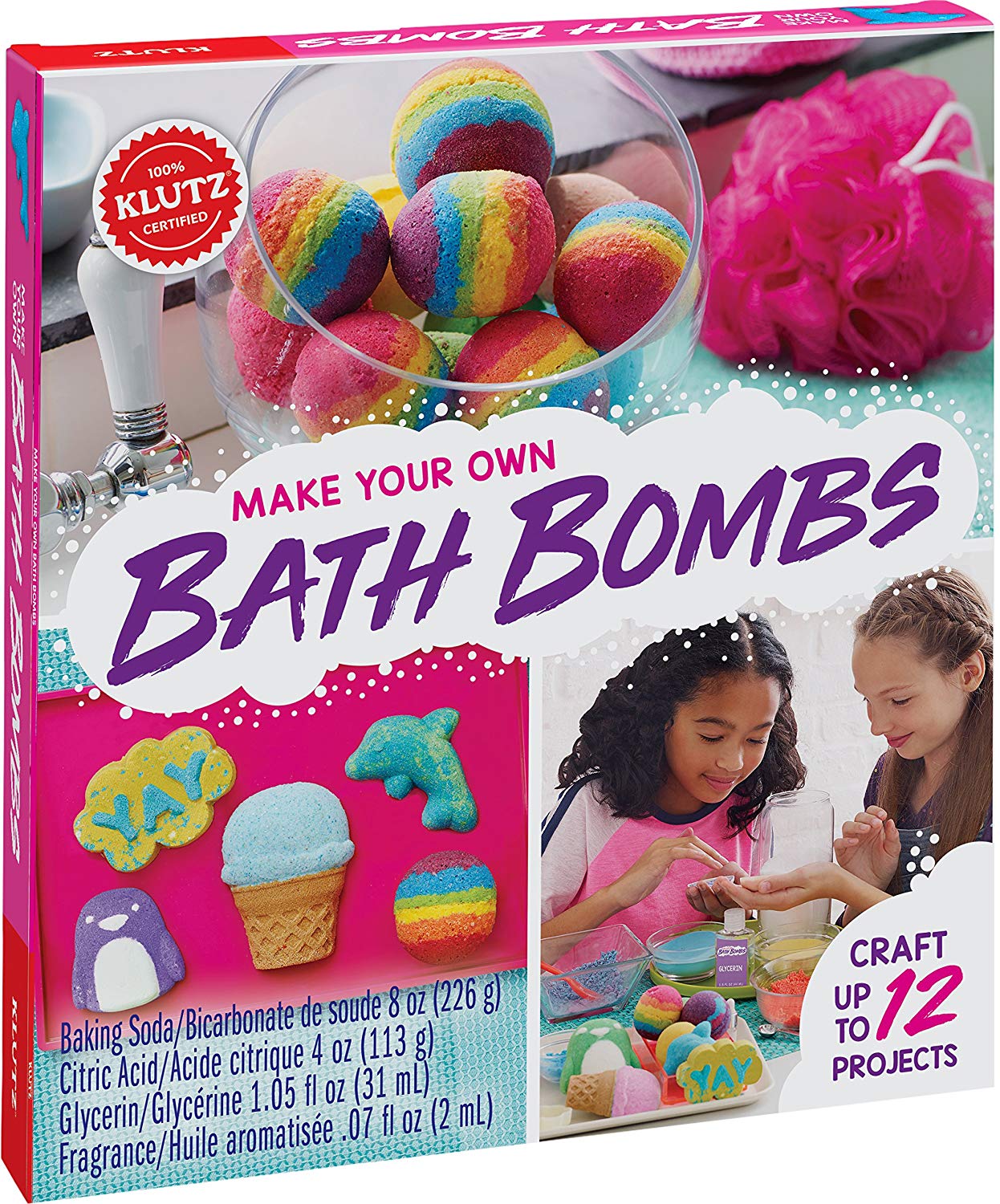 Bath bombs are a very accessible craft – and a chance for a science lesson on the side! – but what I like about this kit is the fact that the bi-carb is coloured, and the cute little moulds! I’ve done round bath bombs at home, but not coloured or shaped, which I think makes it more appealing to children. 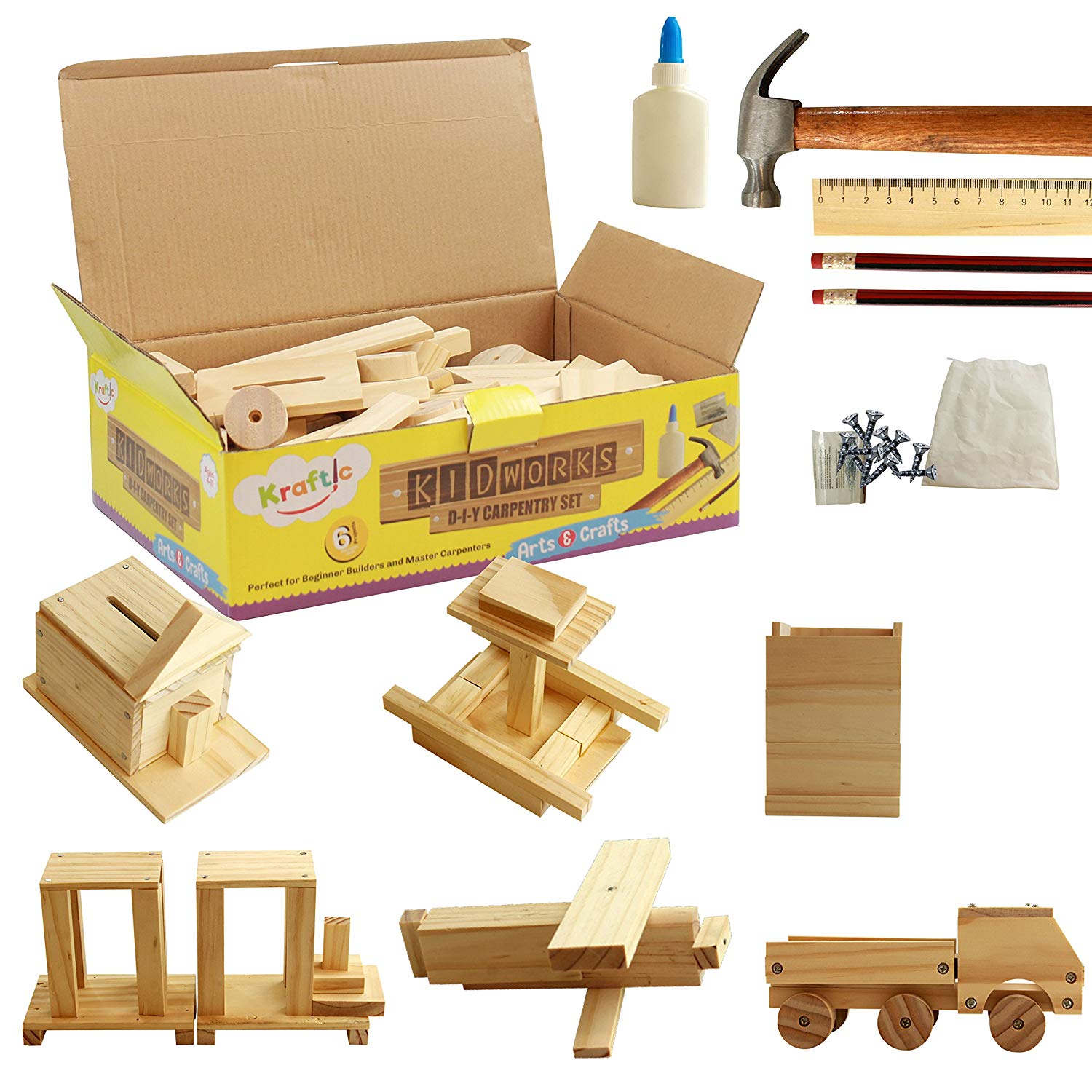 I can see a lot of kids getting really into this little kit – using a hammer! A little hammer! Adorable! You also get instructions and materials for six different projects in this kit. 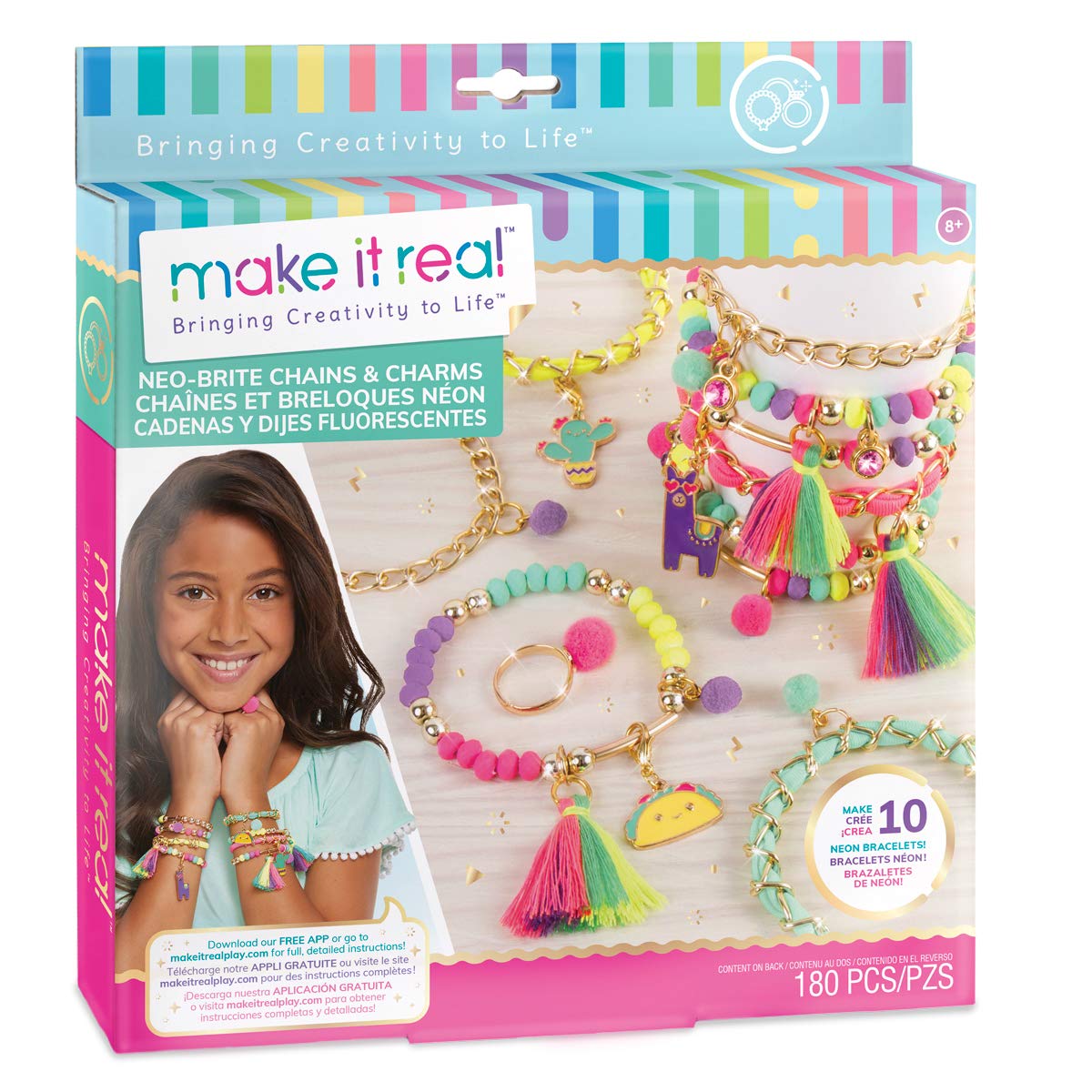 Charm bracelets are always a hit and this kit is very cute as the little bits and bobs included make for some pretty unique and quality looking bracelets! How swanky!

Make Your Own Soap Kit 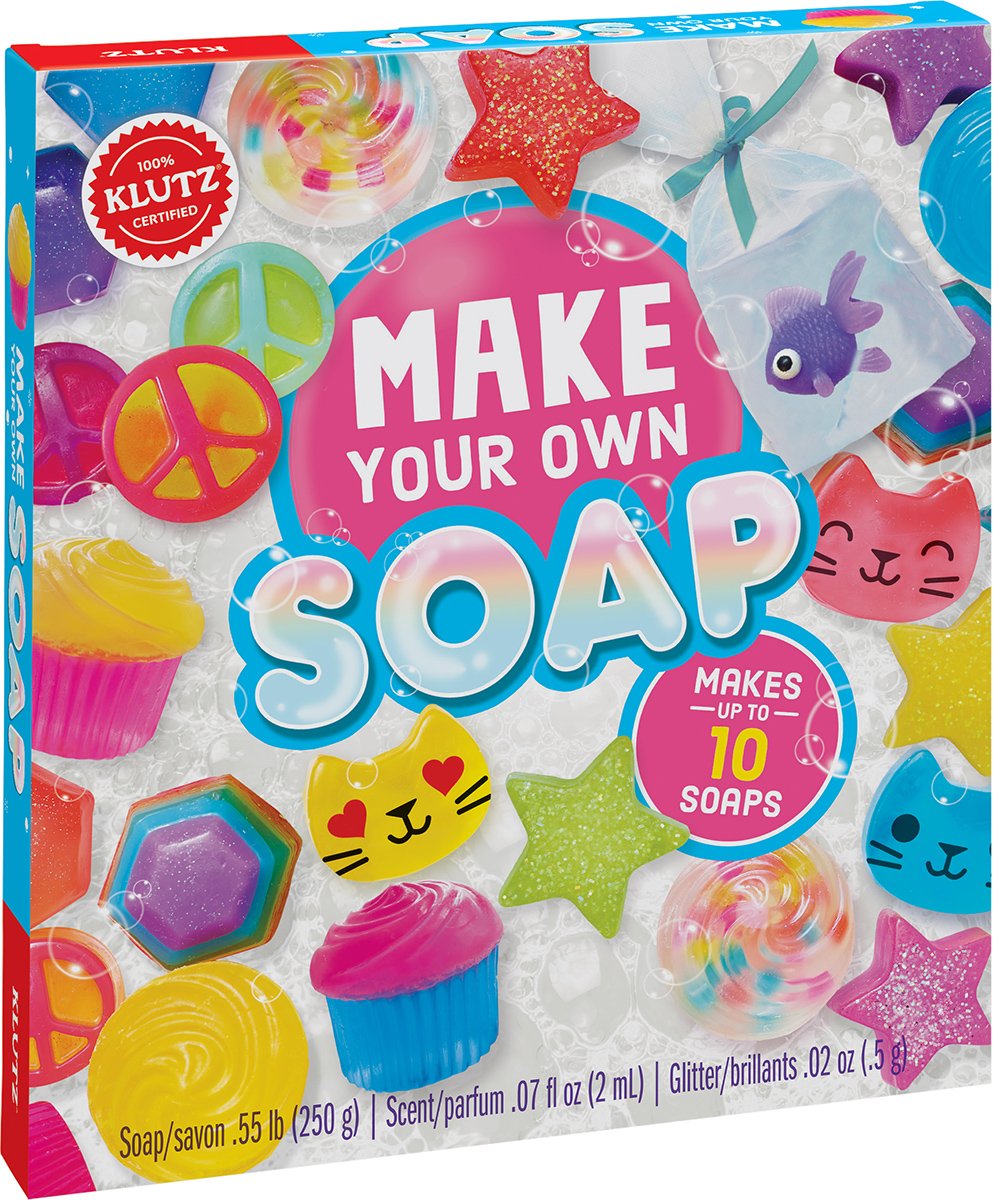 Soap making is very cool, but it can be quite complex, so getting everything in a kit is great. There’s some cute and quirky ideas in this kit, and because it’s mostly mixing, it’s a good one for a variety of ages, and you get something useful out of it. Neat! 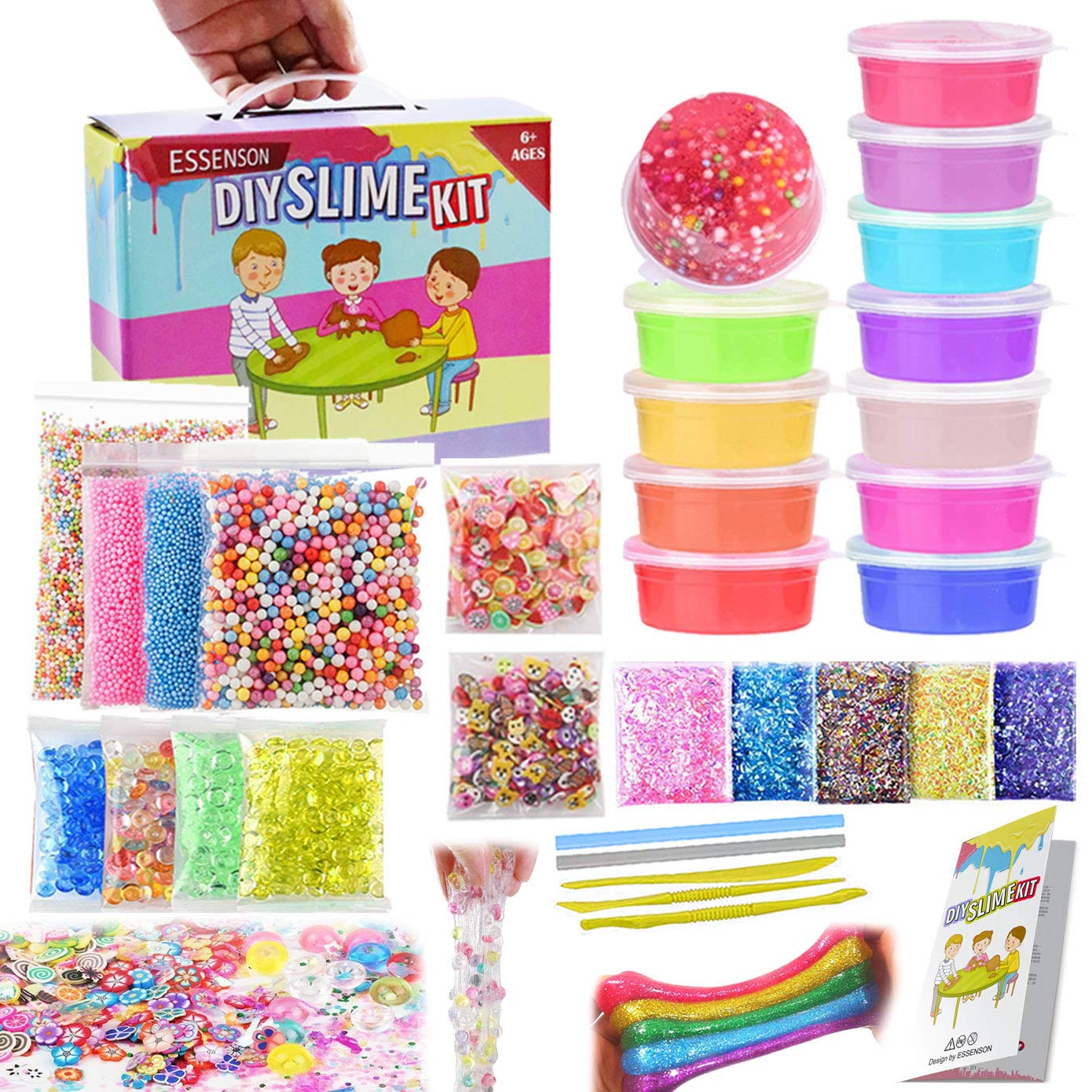 We’ve done a slime making kit before, where you make the slime from ingredients, and gotta say, didn’t love it. What I like about this kit is the slime comes made, but you can add stuff to it! A variety of stuff, too. Really, when isn’t slime a hit with kids?! 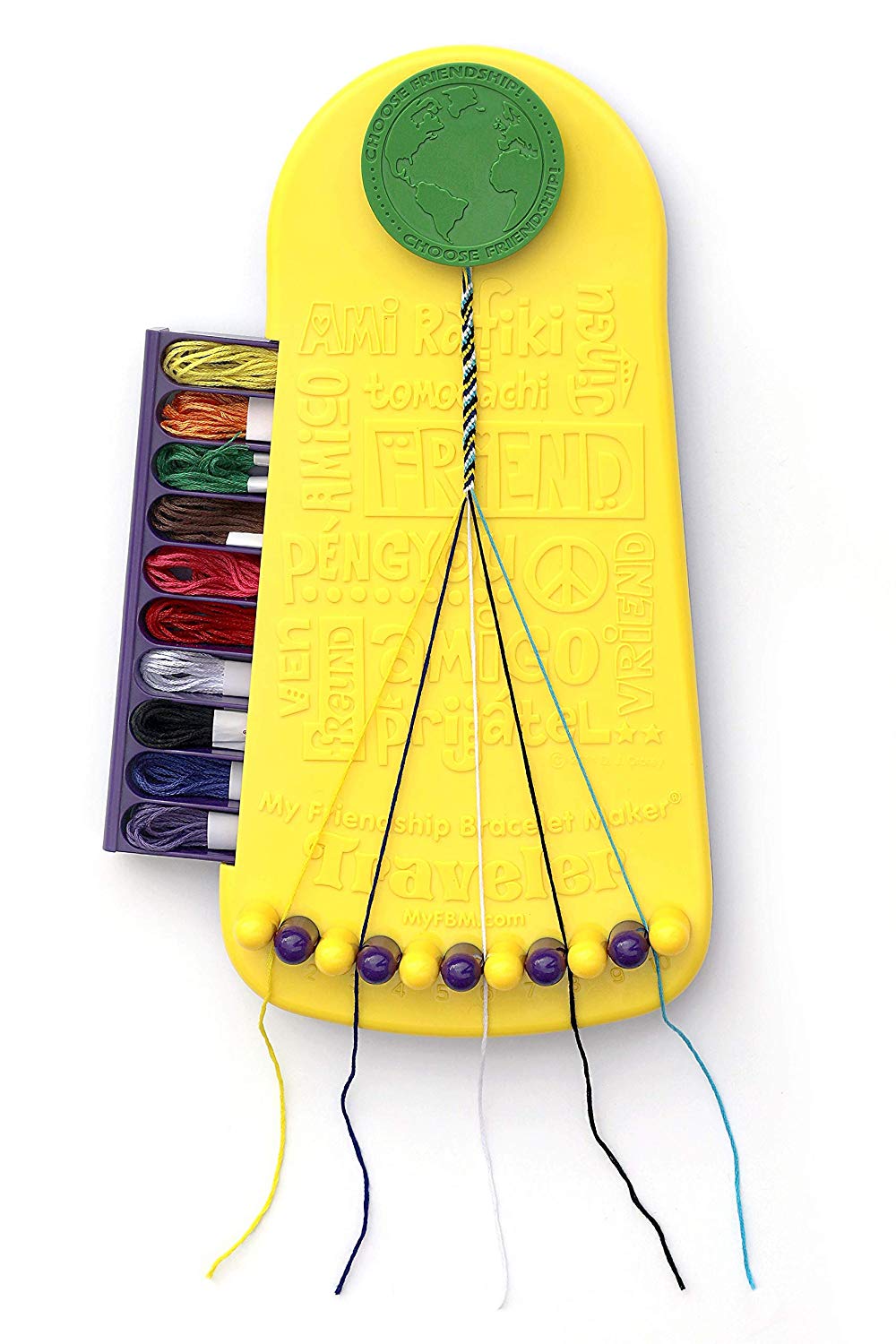 I used to scavenge for embroidery floss from my mother when I was a kid and make friendship bracelets, and the most annoying part was trying to find somewhere to tape the thing down so you could work on it. I used to hold the ends in my teeth and knot downwards, but that wasn’t fun after a short while, I’ll tell ‘ya. This very cute and very practical kit would have made me absurdly excited as a kid, and I want it now… for my daughter… to teach her to make friendship bracelets… yeah, not for me at all… totally for her. 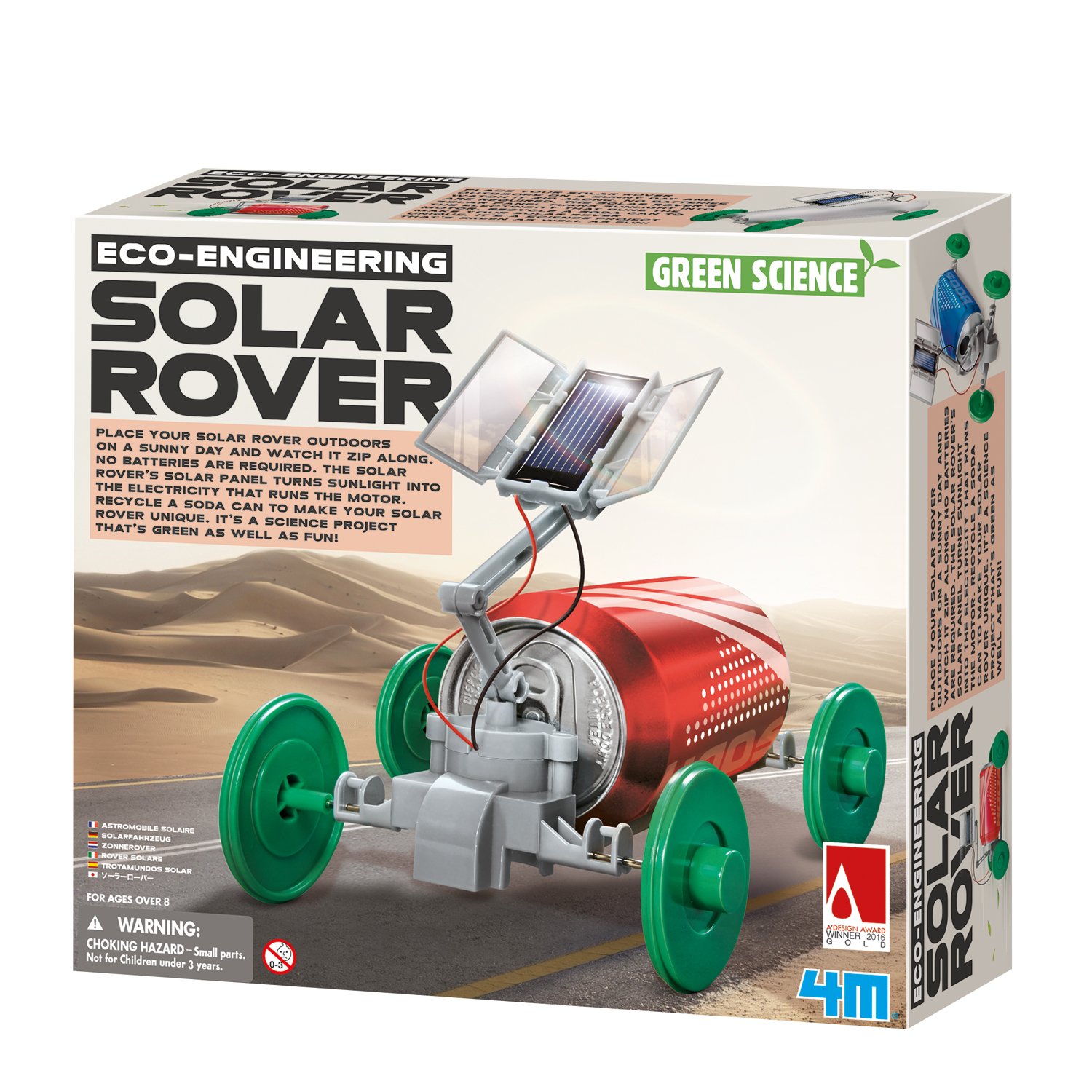 This is borderline on whether it’s a craft kit or creation kit, but it’s so cool and a lot of older kids would really love to make this thing! I mean, who doesn’t want to have their very own rover?! Then you and your tiny human can have a blast pretending your mission control and making up a whole space opera for your wee rover! 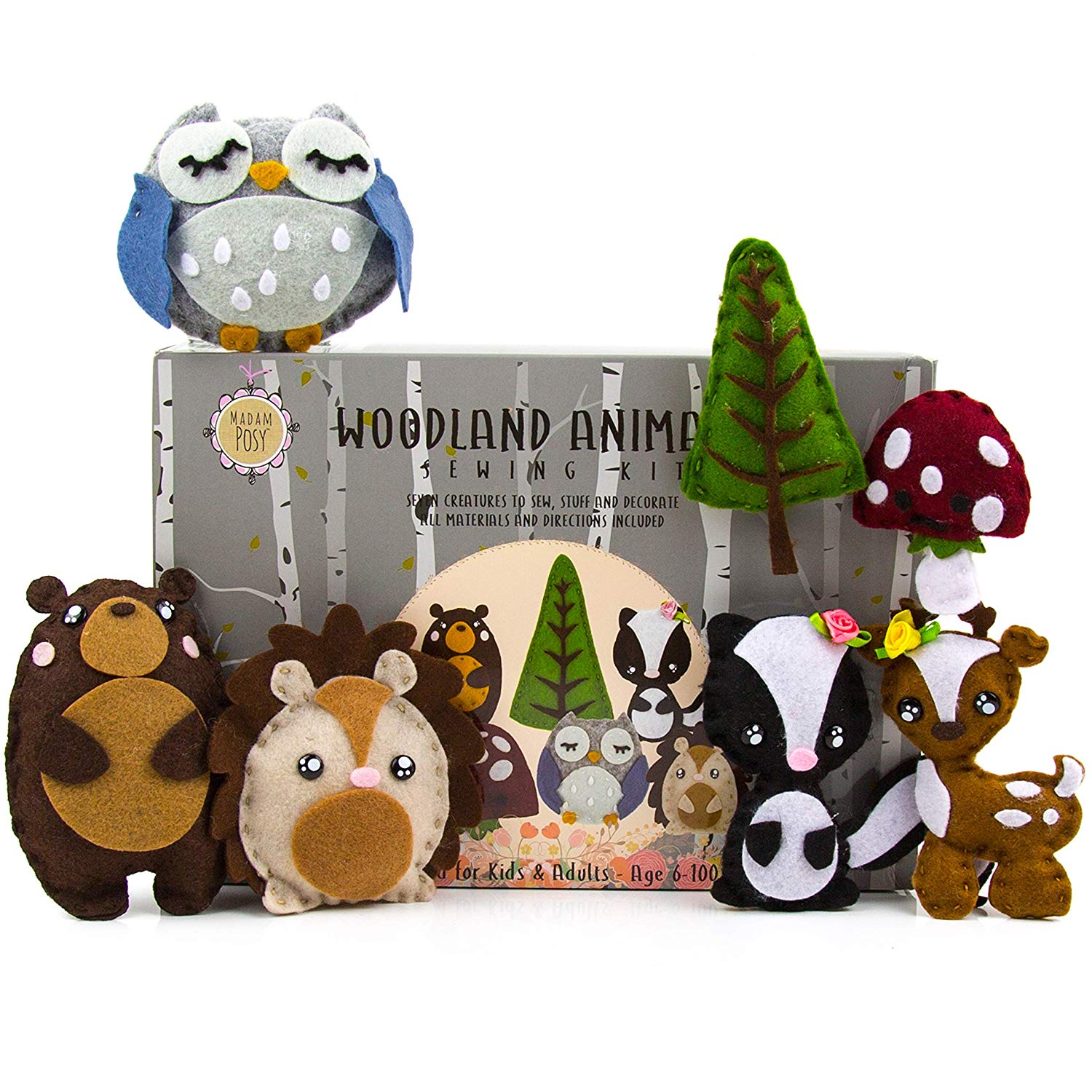 Oh the cuteness! These adorable – and accessible – little critters are triggering my cute aggression big time! This is a great kit because you get everything to make all seven woodland creatures, but it’s all pre-cut so your little ones can get right to the stitching! 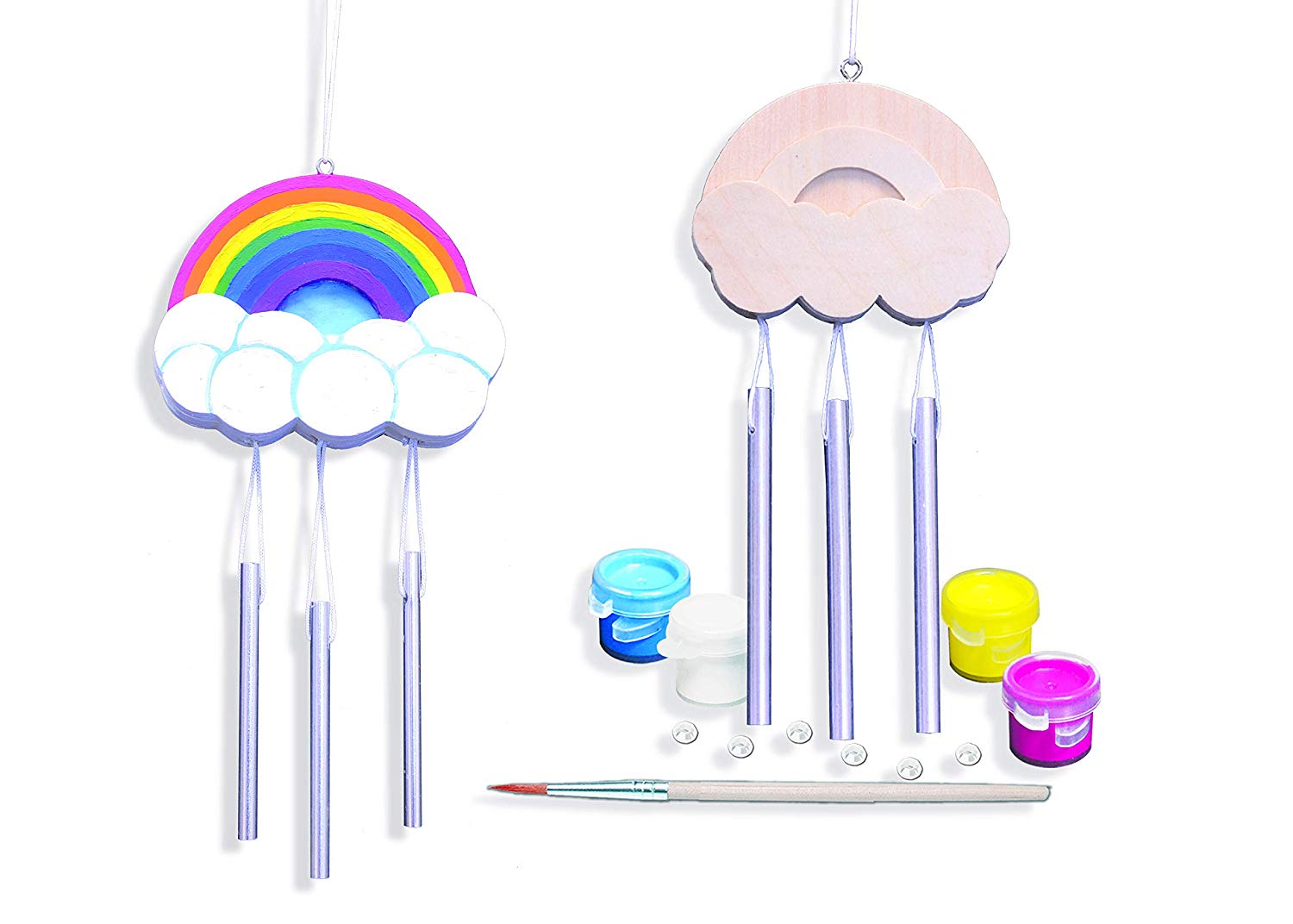 Okay, okay, I snuck a painted rock in, but only because it’s a quintessential craft activity for kids. But what I love about this kit is that it’s very open-ended and there’s materials for twelve separate projects included in the kit, including a wind chime. Wouldn’t it be just so cute to have a wind chime made by your own wee one? I’d love that! 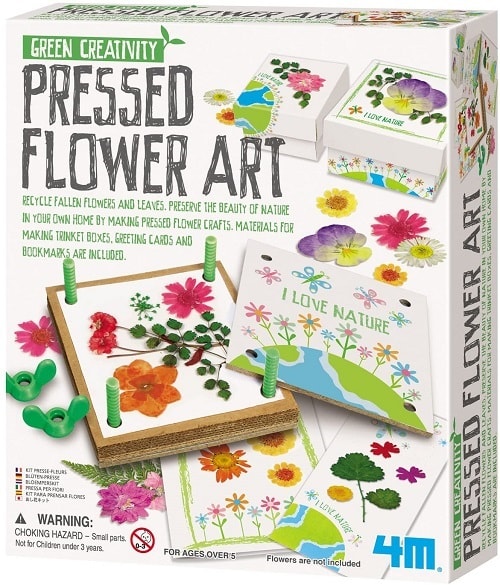 My daughter loves to give us flowers, and she loves it when we press flowers in a book, but this little kit is next level! She’d flip out over a proper press like this, and I love that you can just keep using it. 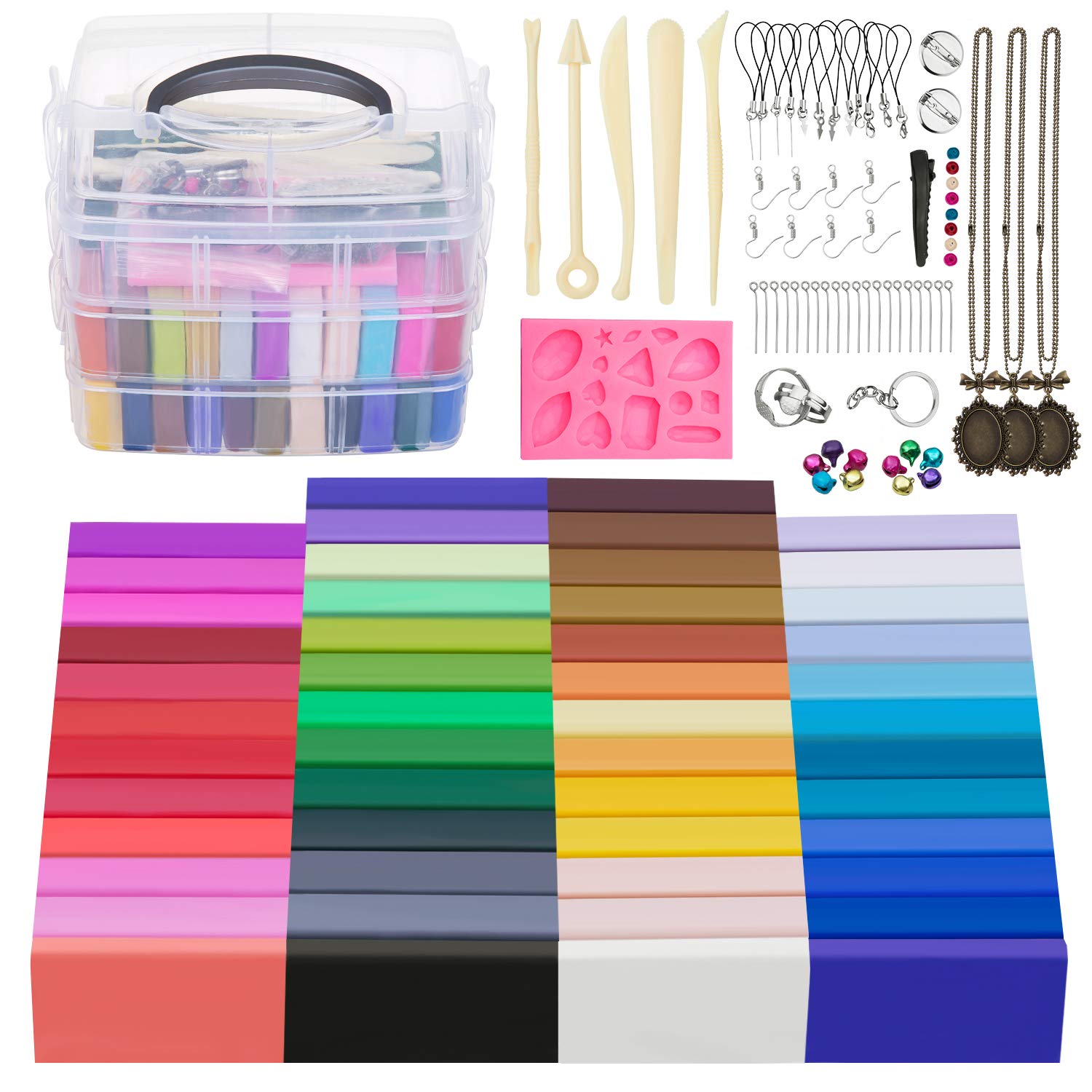 I recently began working with polymer clay (love it!) and every time I get it out my daughter instantly wants to join in and make things too. It’s a very kid-friendly craft, so long as an adult is the one to bake the finished items.

Looking to relax and have fun while your kids work with on kits? The Mother Huddles got you covered! Check out our guide on the best craft kits for adults here!

The Best Gifts For Quilters and Sewers – 2023 Guide