Viewer Favorites
Pay Special Attention To These Things When Feeding Your Kids
The Best Gifts For Quilters and Sewers – 2023 Guide
6 Tips to Choose a Color Scheme for Your Home
The Best Craft Kits For Kids – 2023 Guide
Epsom Salt (Elsa’s Magic) Painting
6 Ways to Tell if Your Kid Is Struggling With School & How...
Looking to Start Your Career as an Entrepreneur? Here’s How
The Relationship Between Nutrition and Pregnancy
5 Signs It’s Time to Get Your Child a Math Tutor
Fashion Items That Double Up With A Medical Use As Well 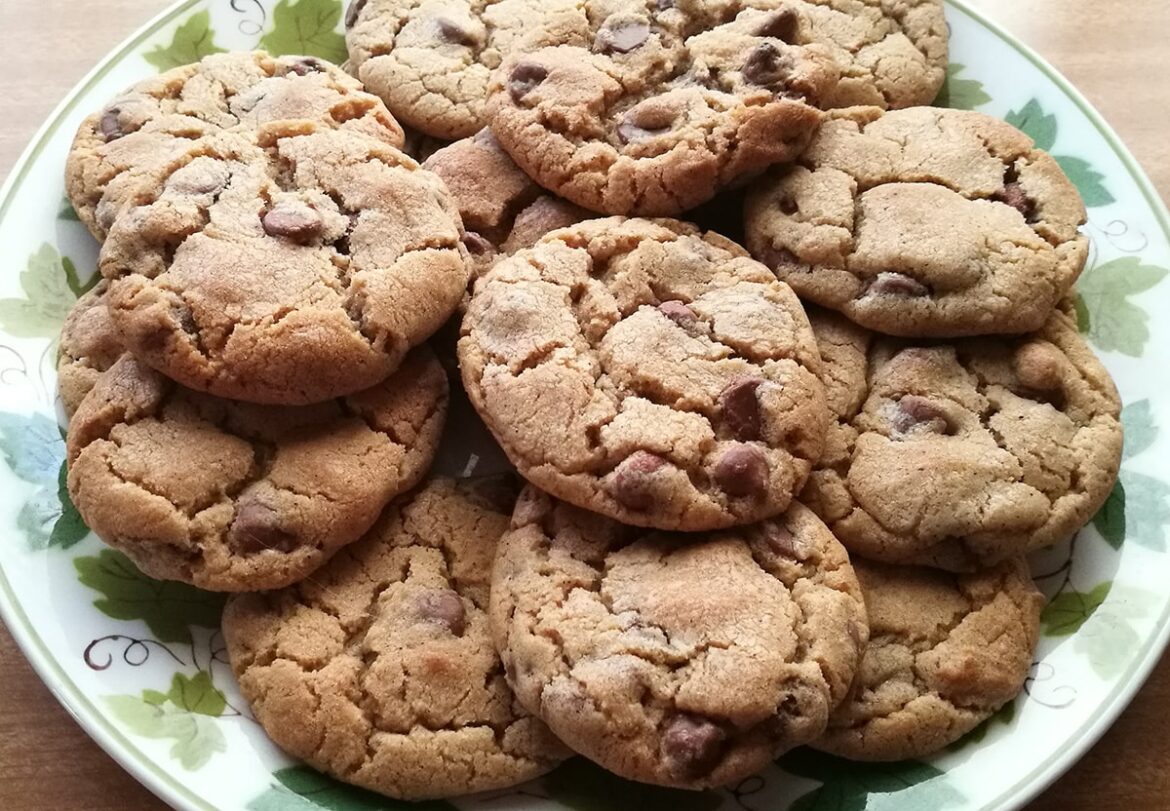 Do you ever go Googling for a recipe, and think you’ve found what you’re looking for, only to have to scroll so far down a page that you think you might have clicked on the wrong link? I don’t know what inspires people to put their life-story before the recipe, but don’t worry, I got you, here’s the recipe and method for amazing chocolate chip cookies, and my thoughts and tips about them are below! 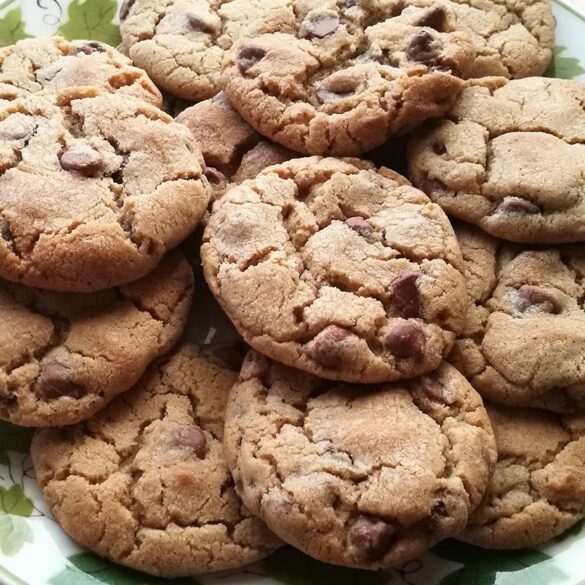 Step 3 - Sift flour, self-raising flour, ground ginger, cinnamon, nutmeg, and cloves and stir in a little at a time.

Step 5 - Roll balls of around 1tbs of cookie dough and place on a plate, then chill in the fridge for half an hour

Step 6 - Space evenly on a tray, and cook for around 15 minutes, then cool on tray for 5 minutes, and finally on a wire rack for a further 15 minutes. It will probably take around 3 batches to cook all the dough.

Pre-heat your over for a while to get a constant temperature, as many ovens heat past the temp-setting very quickly, and then ease back to the desired temperature.


Use unsalted butter, and be sure to use good butter, as poorer butter has higher water content leading to flat, spread-out cookies.


If your cookies are spread-out and crispy, which means they're melting before they're cooking, your oven might not be hot enough. You can also try adding a little extra flour next time you make them, as this can combat the issue. 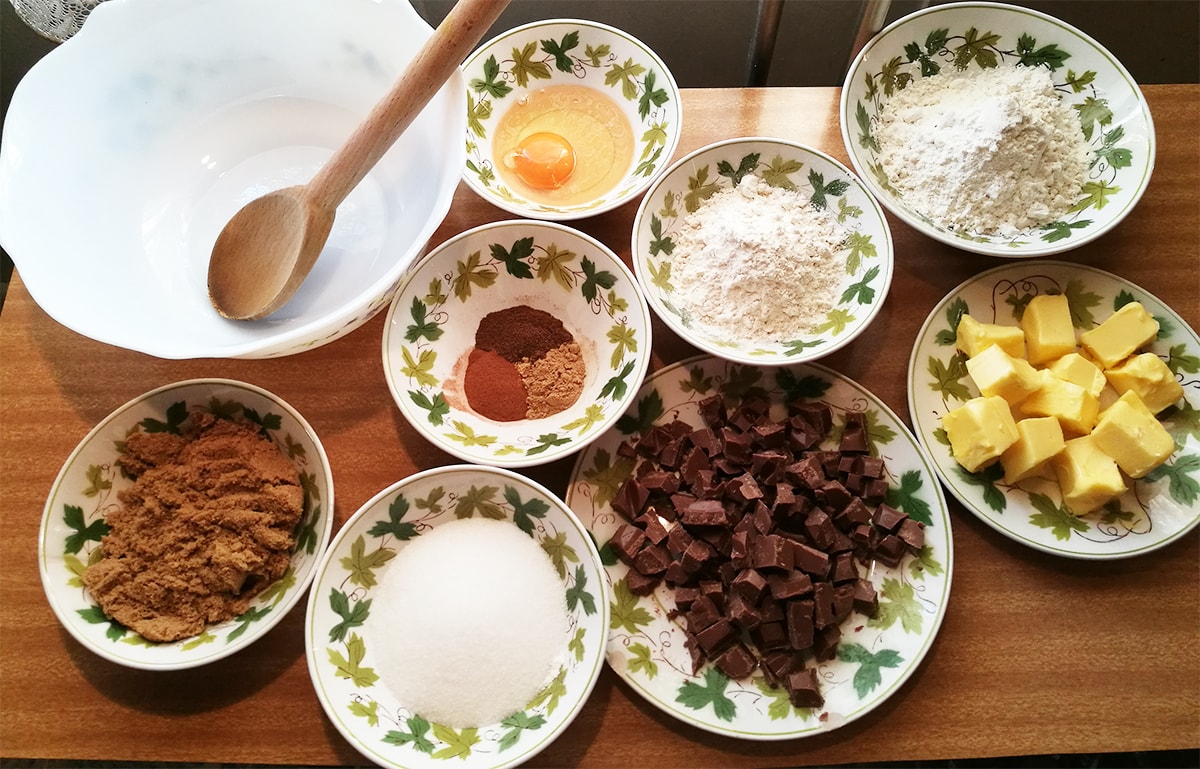 For as long as I can remember my mother had a PWMU cookery book. It was from the 1970’s and had a picture of a dessert with apricot halves and glacé cherries in it – at least that’s what I think they are, I’ve never thought to check if it states what recipe the picture goes with. Anyway, over the years my mother had the book, she wrote in a few of her own recipes, and one of them is so obviously well used, with stains from cooking and dog-eared and a crinkly tactility to the page that it’s like a very old treasure map. In a way, it is, but this treasure is the best chocolate chip cookies you’ll ever set your teeth into!

They’re spiced and chewy and very, very moreish. They’re also a good starting point to adapt to your own preferences. Today we made two batches, one with chunks – taking a block of cooking chocolate and roughly chopping it – and one with chips, but my mother made it exclusively with chocolate chips. The chips version did turn out better, we found. I also had a friend make a batch with white chocolate chips and different spices, which she said were fantastic. I have also made them without chocolate chips, but instead making small cookies that I then sandwiched with a chocolate filling, which were very tasty, too. 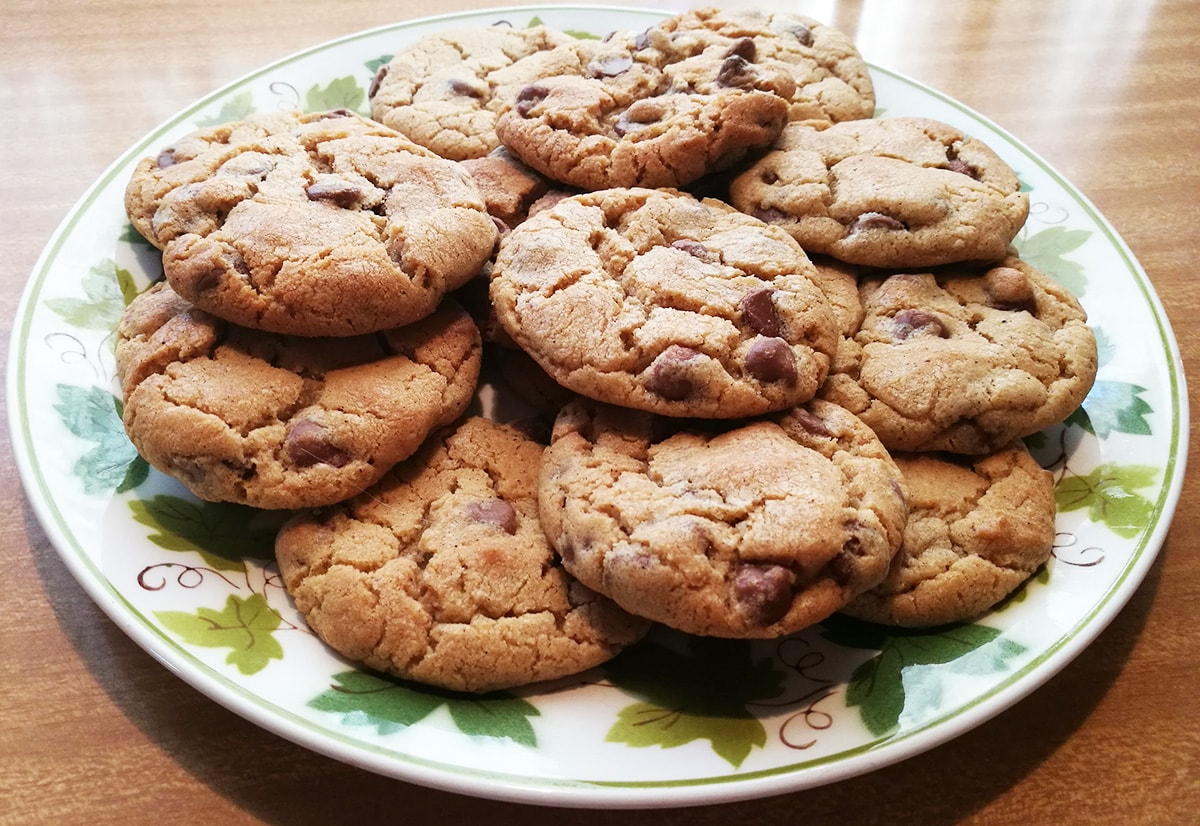 My 5-year-old daughter and I had a blast making these cookies together, and we all enjoyed eating them, after! Of course, it’s been so damn hot here that we can only bake a night, but that just means that when you wake up in the morning the house smells blissfully delicious! I hope you enjoy making and eating these, the very best chocolate chip cookies!

How to Buy an Engagement Ring for That Special Someone

How to Season a Cast Iron Pan

How To Use An Electric Muffin Maker: A...